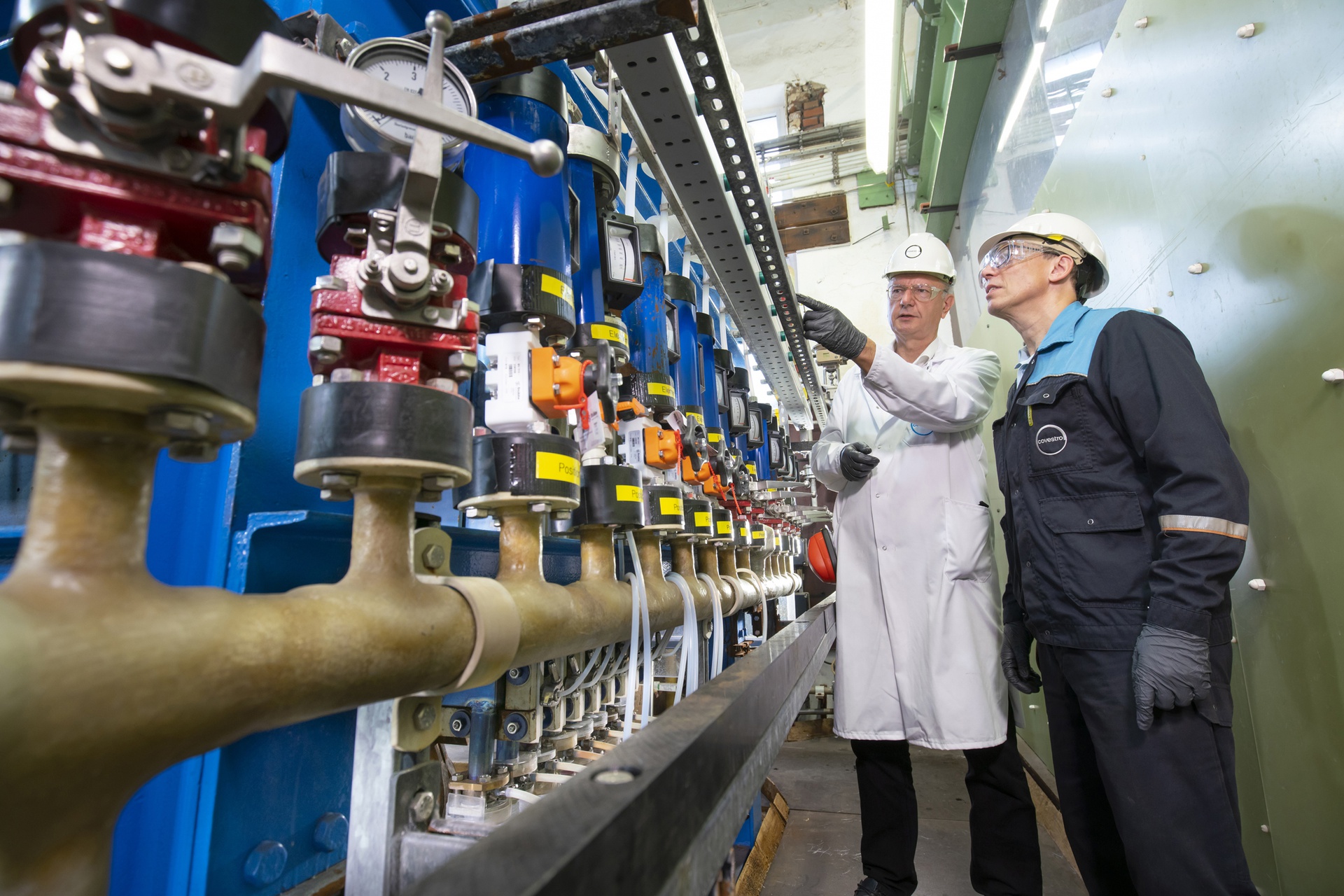 2018-065-950284.jpg
Prüfende Blicke während eines Stillstands an der Demonstrationsanlage in Leverkusen: Hier wurde die Sauerstoffverzehrkathoden-Technologie seit Jahren weiterentwickelt und intensiv getestet.
The materials manufacturer Covestro is planning to build its own chlorine production plant in Tarragona (Spain) and will use a particularly sustainable process: oxygen-depolarized cathode technology, that consumes around a quarter less energy than the conventional method. At its location in Spain, the company is building the first industrial-scale plant based solely on this state-of-the-art technology.

Covestro is currently investing around EUR 200 million at Tarragona to increase the site’s competitiveness. The new chlorine production plant is a key component of that. About one third of the production costs for chlorine are usually spend on energy. Thus, the selected technology makes an important economic contribution. “Sustainability and energy efficiency played a vital role in choosing the process,” stresses Chief Technology Officer Dr. Klaus Schäfer. “This is a special success story for us since the development of this technology began at our company over two decades ago.”

Chlorine is needed to make around two-thirds of all polymers, yet it does not occur naturally in its pure form. Instead, it is only found in chemical compounds – such as in rock salt, from which chlorine can be obtained using electrolysis. However, the process uses a significant amount of energy. Covestro and Thyssenkrupp Uhde Chlorine Engineers have therefore developed an innovative technology that consumes around 25 percent less energy than conventional electrolysis through the use of an oxygen-depolarized cathode (ODC).

ODC technology is based on the conventional membrane process, in which chlorine, caustic soda and hydrogen are usually produced from rock salt and water. The crucial difference: The hydrogen-generating electrode normally used is replaced by an oxygen-depolarized cathode. Only chlorine and caustic soda are produced. As a result, a voltage of just around two instead of three volts is required. That vital volt less.

“The change in this process sounds simple, but was a ground-breaking development for chlorine manufacturing,” says Hanno Brümmer, Head of Production at the Polyurethanes segment which includes the company’s global chlorine activities. “Initial invention and development work began in our lab back in 1992. We then developed it further together with Thyssenkrupp and were able to start up the first demonstration plant on an industrial scale in Krefeld-Uerdingen in 2011.”

Construction of the new plant in Tarragona is scheduled to begin in the first half of 2019. Chlorine is mainly needed at Tarragona to make MDI. MDI is a precursor for rigid foam, which is an excellent insulation material and is used, for example, in buildings and refrigerators to reduce their power consumption. Compared with the conventional method, it cuts CO2 emissions by around 22,000 metric tons per year – roughly the amount produced by 15,000 cars a year.

About Covestro:
With 2017 sales of EUR 14.1 billion, Covestro is among the world’s largest polymer companies. Business activities are focused on the manufacture of high-tech polymer materials and the development of innovative solutions for products used in many areas of daily life. The main segments served are the automotive, construction, wood processing and furniture, and electrical and electronics industries. Other sectors include sports and leisure, cosmetics, health and the chemical industry itself. Covestro has 30 production sites worldwide and employs approximately 16,200 people (calculated as full-time equivalents) at the end of 2017.

That vital volt less
Back to the Newsroom