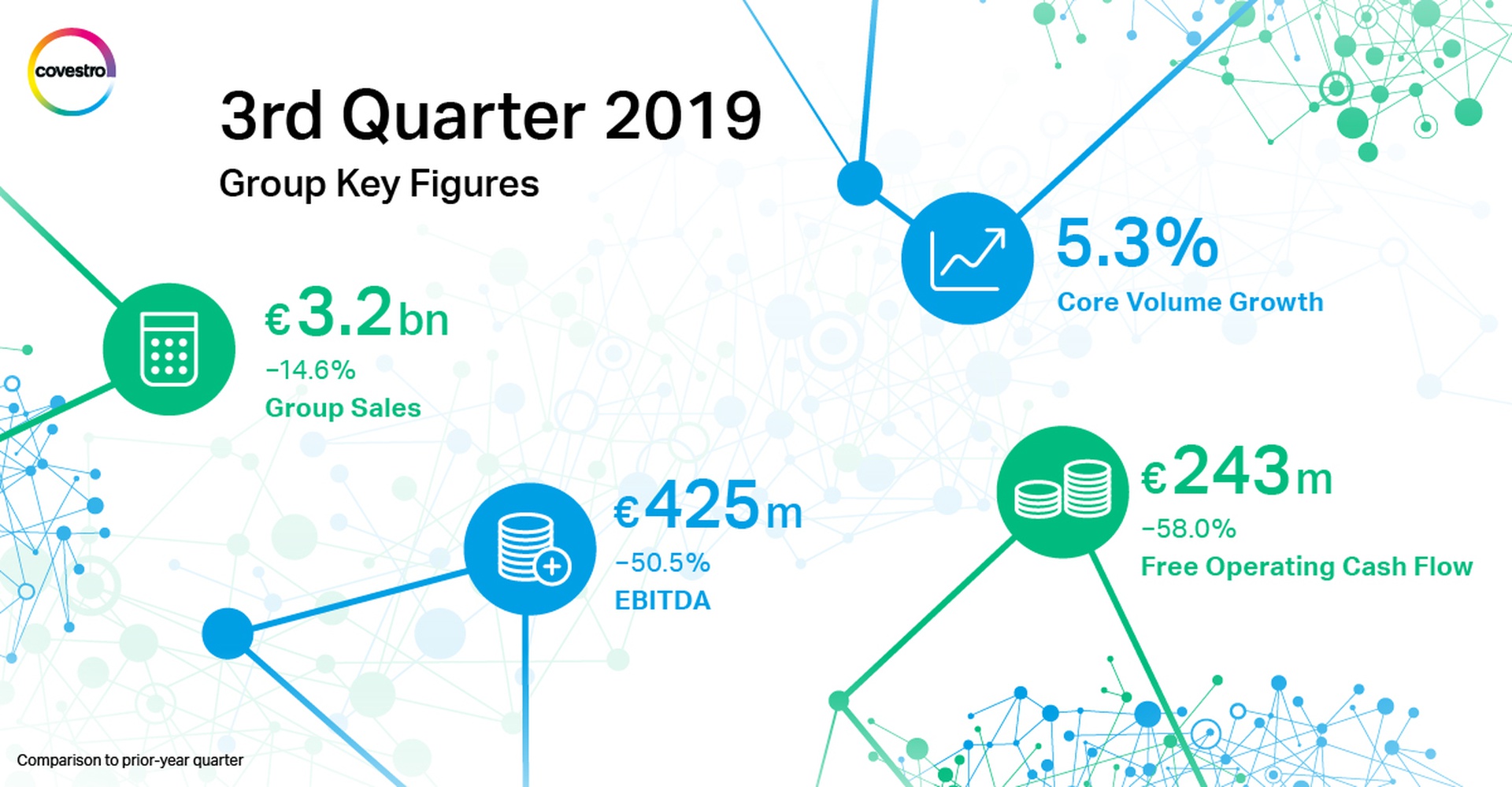 In the third quarter of 2019 Covestro was able to achieve core volume growth of 5.3% over the prior-year period in a continuing challenging economic environment. At the same time, Group sales declined as expected by 14.6% to EUR 3.2 billion due to continued lower selling prices. At EUR 425 million, EBITDA forecast was achieved for the quarter but was down 50.5% from the prior-year quarter as a result of negative price effects. Net income fell to EUR 147 million (–70.4%), whereas free operating cash flow (FOCF) came in at EUR 243 million (–58.0%). This was primarily because of reduced cash flows from operating activities as well as scheduled investments.

“After generating solid volume growth in the second quarter, demand once again grew in the third quarter,” CEO Dr. Markus Steilemann reported. “The economic climate remains challenging, which we notice particularly in the automotive sector. However, our volume growth indicates that our business is well diversified across various industries,” he said. Growth was attributable mainly to the construction, furniture, electrical and electronics industries.

Outlook for the year confirmed and ranges narrowed

Based on the results of the third quarter, CFO Dr. Thomas Toepfer confirmed the outlook for the year as a whole. “We remain confident we will reach the targets we have set for the fiscal year,” emphasized Toepfer. “Margins were unusually high in the prior-year quarter, which is why the year-on-year decline in sales and earnings is in line with our expectations.”

In order to remain successful in the long run with its sustainable and innovative solutions, Covestro aims to narrow its focus on circular economy going forward and has launched a new strategic program to this end. In its production processes in particular, the Group is aiming for the greatest possible use of raw materials from sustainable sources, such as plants, waste and CO2. This should eliminate the use of fossil resources such as crude oil as far as possible. Above all, used plastics must be recycled systematically and to the greatest possible extent.

Sustainability and innovation were also the keywords at K2019, the world’s largest plastics trade show held in Düsseldorf (Germany). Covestro showcased many different products and technologies there that offer solutions to urgent global challenges. For instance, it presented high-tech materials that use carbon in more environmentally friendly textiles, improve the performance of wind turbines, and accelerate the expansion of the 5G technology.

Core volumes in the Polyurethanes segment increased by 5.1%. The increased demand in the furniture and electrical and electronics industries, especially in household appliances, as well as in the construction sector more than offset weaker demand from the automotive industry. However, sales in this segment decreased by 20.1% to EUR 1,478 million due to lower selling prices stemming from increased competitive pressure. This development was also reflected in EBITDA, which fell to EUR 196 million (–54.6%).

Core volumes in Polycarbonates even rose by 9.3% over the prior-year quarter. The electrical and electronics industry and the construction sector were the main contributors to this growth. Sales in this segment decreased by 13.2% to EUR 901 million in the third quarter of 2019. EBITDA fell by 58.1% to EUR 132 million, mostly on account of a negative development in selling prices.

The Coatings, Adhesives, Specialties segment reported a drop in core volumes by 4.0% as a result of weaker demand for coating raw materials from all key industries, particularly the automotive sector. Sales therefore decreased by 3.0% to EUR 588 million. In the third quarter of 2019, EBITDA was down by 11.9% to EUR 111 million, driven by declining volumes and lower margins.

Note to editors:Below please find a table showing key data for the Covestro Group for the third quarter and the first nine months of 2019.The Interim Statement is also available as an online version: https://report.covestro.com/interim-statement-q3-2019 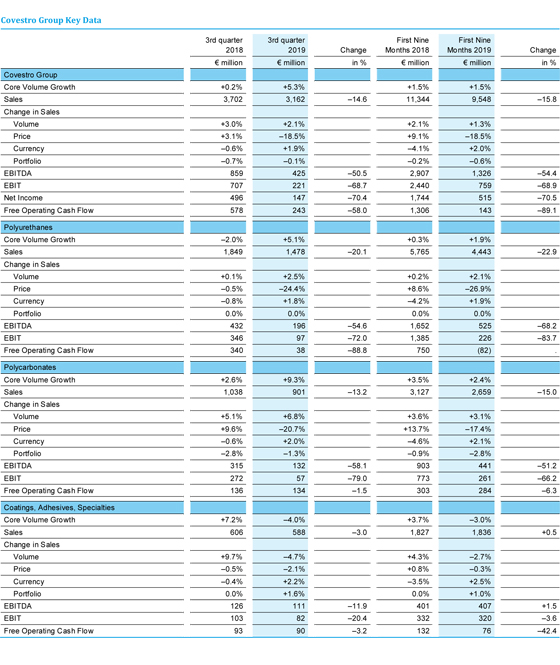