Sustainable and profitable growth to a climate neutral future

Covestro had a successful fiscal year 2021. The Group benefited from strong global demand and buoyant earnings in the year as a whole. Core volumes sold increased by 10 percent year on year, mainly due to additional volumes from the Resins & Functional Materials (RFM) business acquired from DSM. In particular, the rise in selling prices on the back of high demand meant that Group sales increased by 48.5 percent to EUR 15.9 billion (previous year: EUR 10.7 billion) – the highest ever level in Covestro’s history.

“In the past year we successfully undertook further steps towards circular economy. Our very good results in fiscal 2021 underscore once more that we are on the right track with our new strategic setup,” said Dr. Markus Steilemann, CEO of Covestro. “Now we are taking the next steps on our path to a profitable and climate neutral future. After all, one thing is clear: Without our products, the Paris Agreement’s 1.5 degrees target cannot be achieved.” 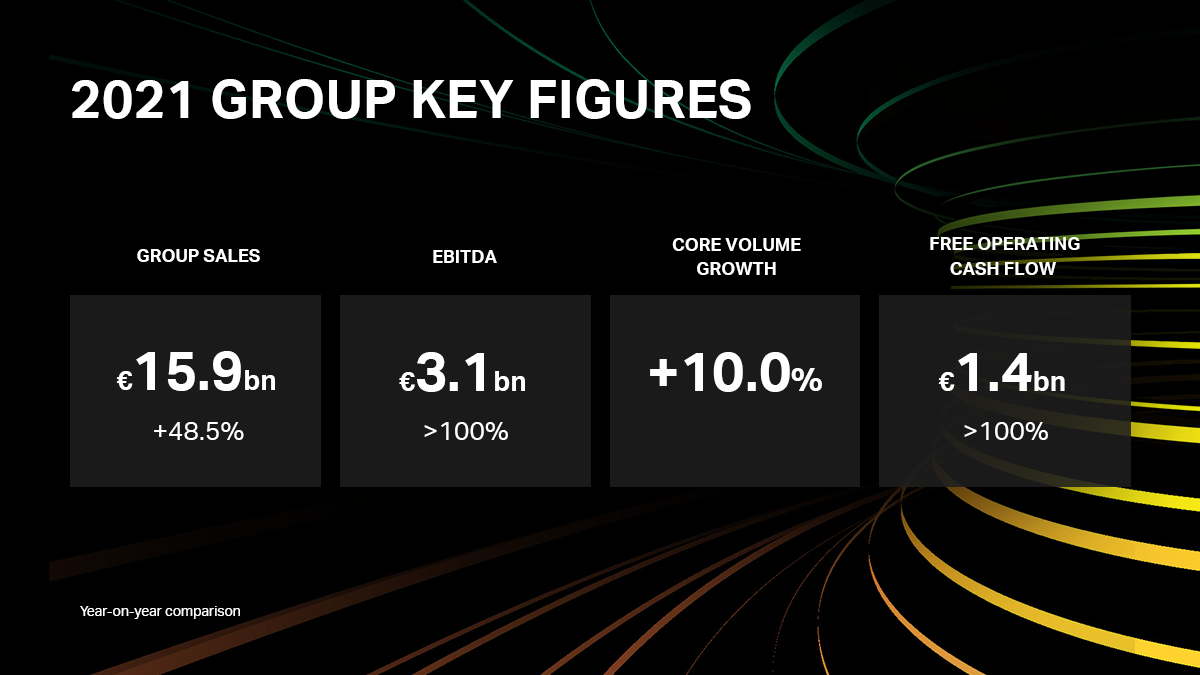 nxr_covestro_AR21_social-media_key-figures_16_9
Group Key Figures 2021: Covestro had a very strong year 2021. The group benefited from a strong global demand and buoyant earnings in the whole year. EBITDA more than doubled. Now Covestro is taking the next steps to a profitable and climate neutral future.

After presenting its new strategy “Sustainable Future” in February 2021, Covestro achieved important milestones in implementing it in the course of the fiscal year. The strategy has customer centricity and sustainable growth at its core. As part of that, the Group restructured its organization in July 2021 and focused its businesses even more closely on the requirements of individual markets and on customers’ needs. Covestro has since been divided into the two reportable segments Performance Materials and
Solutions & Specialties. Integration of the Resins & Functional Materials business acquired from DSM in the Solutions & Specialties segment is proceeding successfully. The company was thus already able to generate synergy effects of EUR 26 million, almost twice the figure originally anticipated for 2021. Covestro expects to generate permanent synergies totaling around EUR 120 million annually by 2025.

Given its very good performance in fiscal 2021, Covestro plans to propose a dividend of EUR 3.40 per share to the Annual General Meeting on April 21, 2022. That is equal to a payout ratio of 41 percent. Covestro redefined its dividend policy last fiscal year. It envisages a payout ratio between 35 and 55 percent of net income in order to create a stronger link to the Group’s overall business situation.

“We can look back on an extremely successful year marked by high demand. Not least, that is reflected in the fact that we were virtually sold out over large stretches of 2021,” said Dr. Thomas Toepfer, CFO of Covestro. “In the past year we have created the foundation for further sustainable growth with our new Group structure.”

In light of the successful business development, Covestro's Board of Management has also resolved on a share buyback program with a total volume of approximately EUR 500 million over the next two years. The repurchased shares are subsequently to be cancelled and the share capital is to be reduced accordingly. “Major acquisitions are not Covestro's focus at the moment; instead, we believe investing in our own shares is the best investment," Dr. Thomas Toepfer continued. "We are convinced of our company and want to create additional value for our shareholders."

Covestro is making systematic advances on its path to circular plastics production and has set bold climate targets. The Group is striving to become climate neutral and achieve net zero* emissions by 2035. On the path to achieving that, Covestro has already reduced its specific greenhouse gas emissions per metric ton of product produced by 54 percent in 2021 compared to 2005, achieving its sustainability target for 2025 already today.

Now, the company plans to cut greenhouse gas emissions from its own production operations (scope 1) and from external energy sources (scope 2) by 60 percent to 2.2 million metric tons by 2030. In the long run, Covestro aims to use renewable energies only, such as wind power and solar energy, as well as alternative raw materials such as biomass, waste, CO2 or hydrogen within its production processes. In addition, a reduction target for the long-term reduction of indirect greenhouse gas emissions from upstream and downstream processes in the value chain (scope 3) is to follow in 2023.

Investments in a circular future and sustainable growth

As a pioneer for a circular and climate neutral future, Covestro has been awarded ISCC PLUS mass balance certification for several of its production facilities. Further sites will also acquire it in the future alongside the certified sites in Antwerp (Belgium), Shanghai (China) and the German Lower Rhine locations at Leverkusen, Dormagen and Krefeld-Uerdingen. Covestro can offer its customers, for example, the rigid foam precursor MDI and the high-performance plastic polycarbonate as “drop-in solutions”; they are based on alternative raw material sources in accordance with the mass balance approach and are made in a quality identical to conventional counterparts. As a result, the company helps its customers steadily decrease their carbon footprint across the value chain.

Covestro also achieved further successes last fiscal year in gradually switching its production sites to green electricity. The company operates cooperation models with energy suppliers who generate onshore and offshore wind power and solar energy so that it can keep on cutting its greenhouse gas emissions. To enable that, the Group signed multiple Power Purchase Agreements for its sites in Belgium, China and Germany in 2021.

Covestro is updating and expanding its existing management system at the start of fiscal year 2022. The previously used growth indicator of core volume growth will be replaced by EBITDA. The Group is also adding a sustainability component, measured by direct and indirect greenhouse gas emissions (scope 1 and 2) in 2022.

“Adaptation of our Group controlling is a further logical step toward circularity,” said Dr. Markus Steilemann. “With regard to our ambitious goal of becoming climate neutral, we will thus link profitability and sustainability even more closely in the future and continue on our sustainable growth trajectory.”

Covestro expects an EBITDA value between EUR 2.5 billion and EUR 3.0 billion and a FOCF of between EUR 1.0 billion and EUR 1.5 billion for fiscal 2022. The Group anticipates that the ROCE will be between 12 and 16 percent. Covestro expects greenhouse gas emissions, measured by CO2 equivalents, to increase to between 5.6 million and 6.1 million metric tons (level at the end of 2021: 5.2 million metric tons). This increase is mainly attributable to a less favorable mix of external electricity purchases for Covestro, as well as to an expansion in production volumes. Covestro anticipates EBITDA for the first quarter of 2022 to be between EUR 750 million and 850 million. 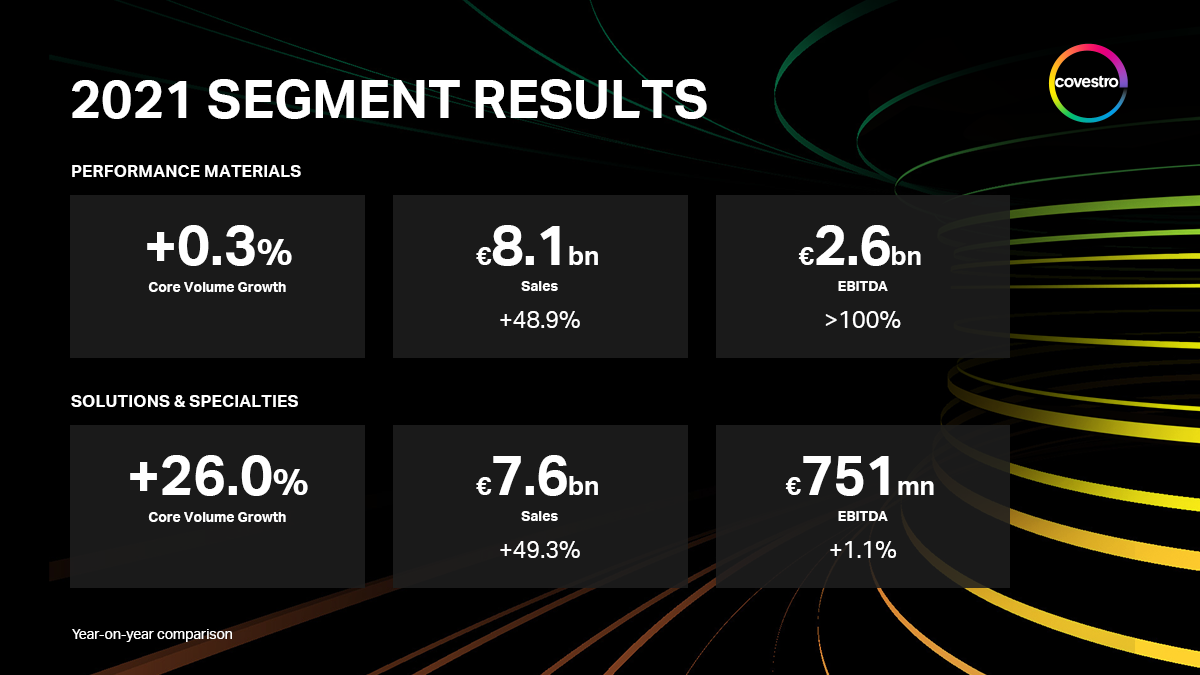 nxr_covestro_AR21_social-media_segments_16-9
Segment results 2021: Covestro recorded growth in both segments. The high selling price level due to strong demand led to a significant rise in sales in both segments. Overall, Covestro thus achieved the highest Group sales in its history in FY 2021.

Growth in both segments in 2021, successful start with the new structure

The Performance Materials segment generated year-over-year core volume growth of 0.3 percent in fiscal 2021. Despite solid global demand, the growth potential of the segment was constrained by limited product availability resulting from, among other things, unplanned weather-related production outages in the first quarter of 2021. The segment’s sales grew by 48.9 percent to EUR 8.1 billion (previous year: EUR 5.5 billion), in particular due to the higher average selling prices. Increased margins due to an advantageous competitive situation and strong demand meant that EBITDA rose year over year to EUR 2.6 billion (previous year: EUR 896 million).

Core volumes sold in the Solutions & Specialties segment increased in the past fiscal year by 26 percent year on year. In particular, additional volumes from the acquired RFM business contributed 16 percentage points to that. In addition, higher core volumes sold in the automotive and transportation industry and in the electrical, electronics and household appliances industry, especially in the EMLA and APAC regions, had a positive volume effect. At the same time, reduced product availability, for instance due to raw material bottlenecks, had a negative impact on core volumes sold and limited further organic growth opportunities. Higher selling prices meant that the segment’s sales in 2021 increased by 49.3 percent to EUR 7.6 billion (previous year: EUR 5.1 billion), while EBITDA rose slightly year over year by 1.1 percent to EUR 751 million (previous year: 743 million).

Buoyant prices boost sales in the fourth quarter of 2021

Covestro is one of the world’s leading manufacturers of high-quality polymer materials and their components. With its innovative products, processes and methods, the company helps enhance sustainability and the quality of life in many areas. Covestro supplies customers around the world in key industries such as mobility, building and living, as well as the electrical and electronics sector. In addition, polymers from Covestro are also used in sectors such as sports and leisure, cosmetics and health, as well as in the chemical industry itself.

The company is committed to becoming fully circular and is striving to become climate neutral by 2035 (scope 1 and 2). Covestro generated sales of EUR 15.9 billion in fiscal 2021. At the end of 2021, the company had 50 production sites worldwide and employed approximately 17,900 people (calculated as full-time equivalents).

Please find a table showing key data for Covestro AG for fiscal 2021 in the side column.

The Annual Press Conference starts at 11:30 a.m. CET. You can watch the conference here.

You can find the presentation for the Annual Press Conference in the digital press kit  at: https://www.covestro.com/press

The Annual Report 2021 is available at https://report.covestro.com 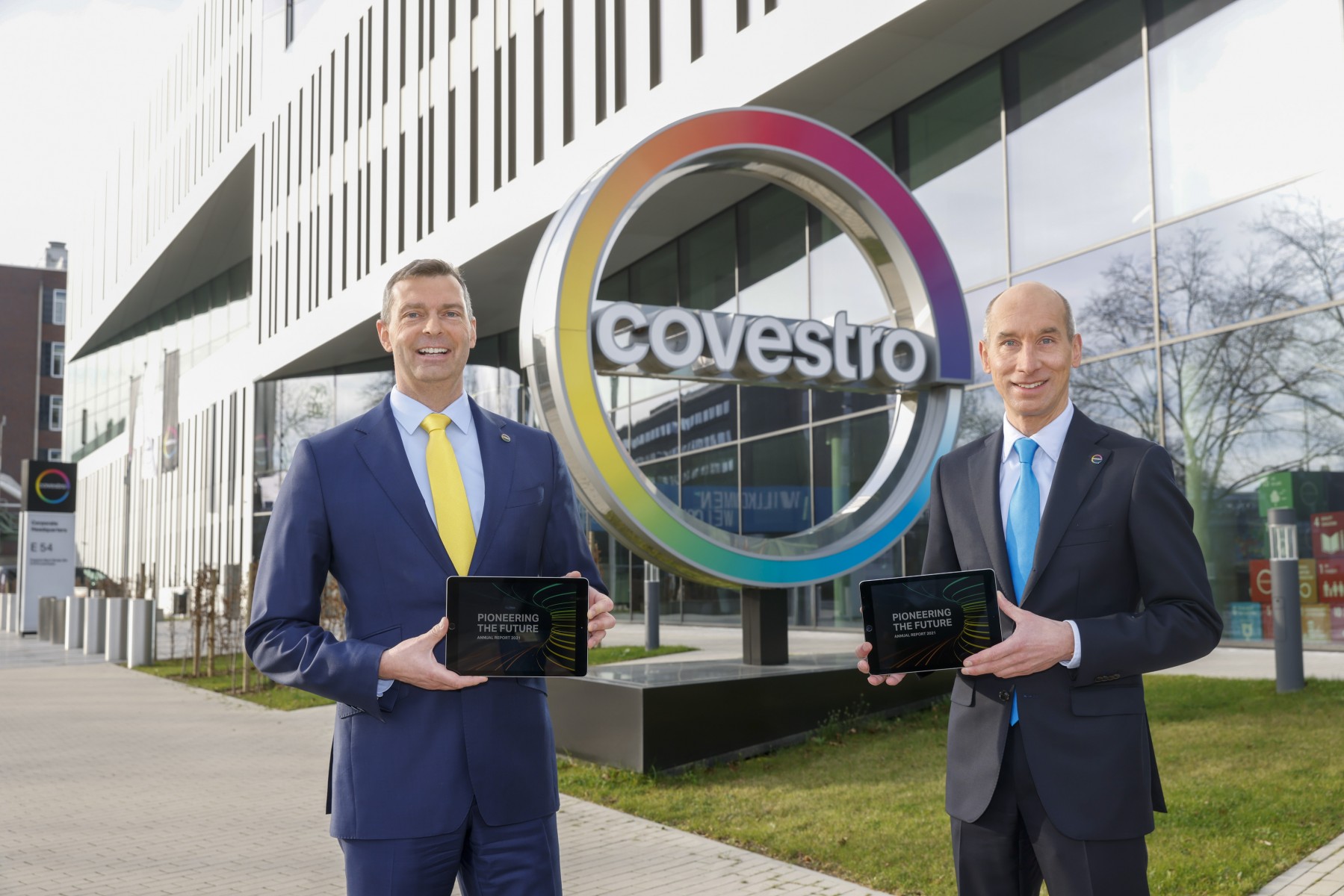 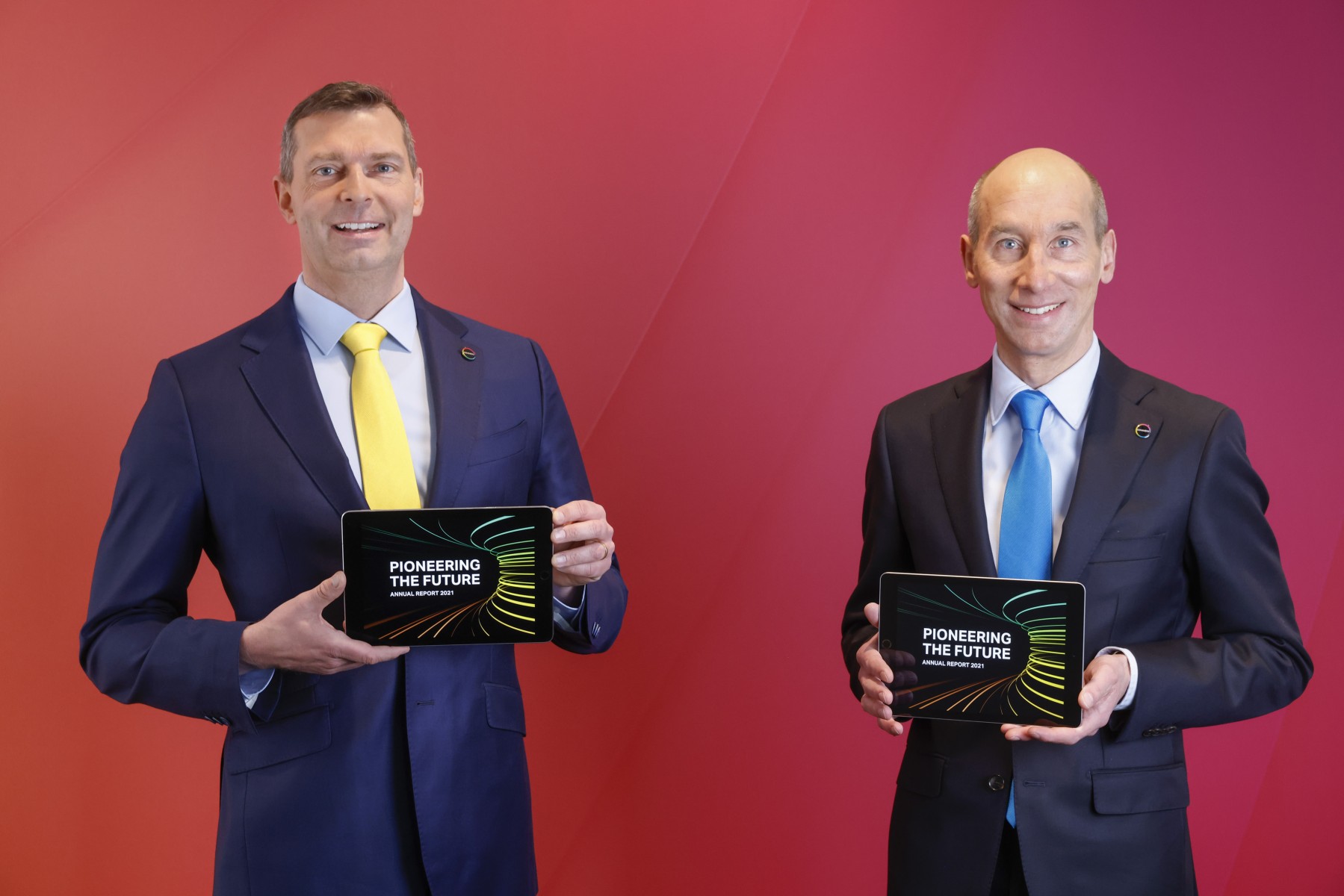