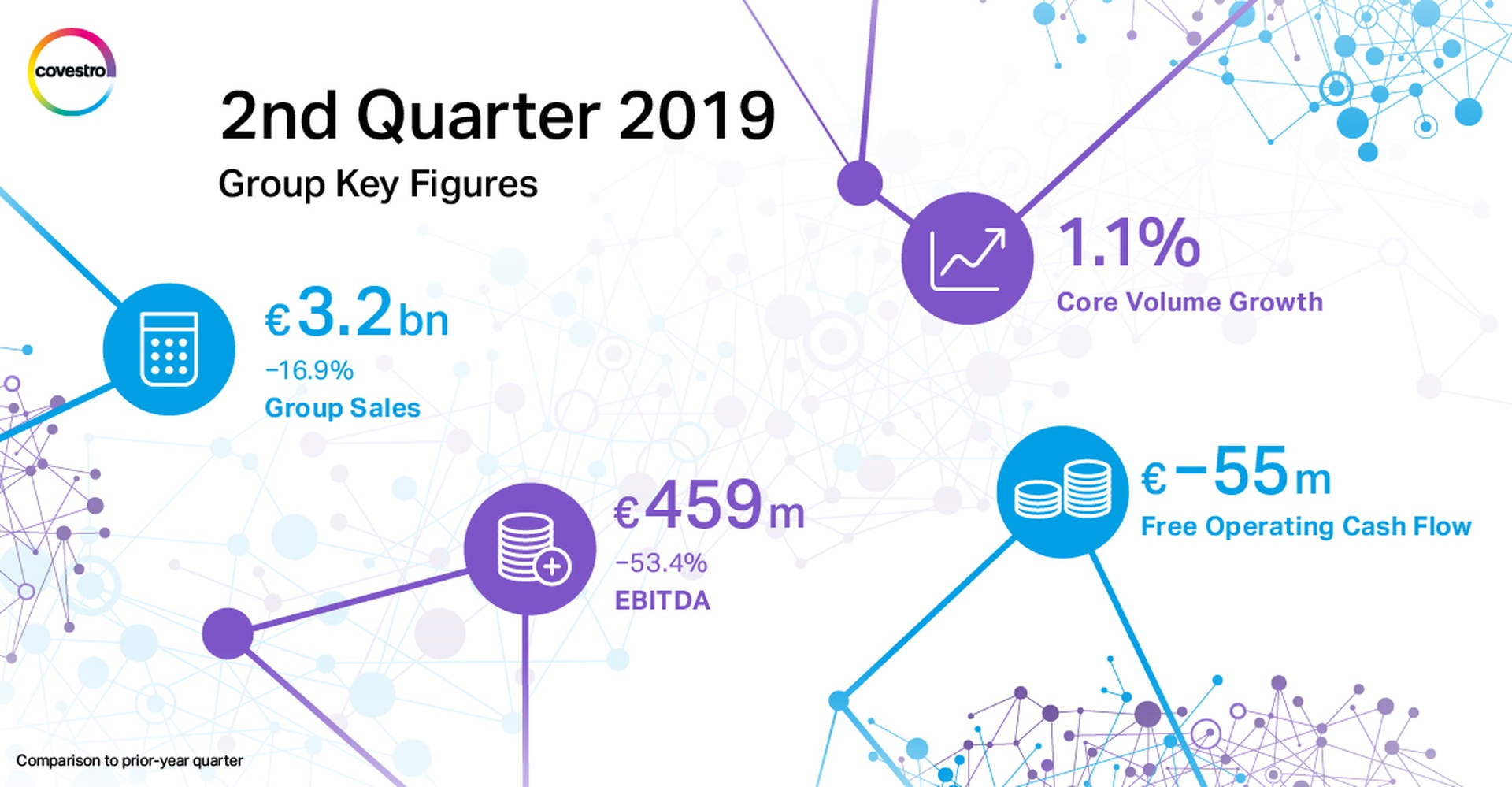 Based on the results of the first half of 2019, Covestro has confirmed its guidance for the current fiscal year. As expected, ongoing intense competitive pressure and uncertainties in major sales markets persisted into the second quarter. Whereas core volumes rose by 1.1%, Group sales fell to EUR 3.2 billion (–16.9%) due to lower selling prices. At EUR 459 million, EBITDA stabilized at the level of the first quarter of 2019 (EUR 442 million), but remained well under the outstanding result achieved in the prior-year quarter (–53.4%). The decline in earnings resulted mainly from lower margins in the Polyurethanes and Polycarbonates segments. Net income declined to EUR 189 million, while free operating cash flow amounted to minus EUR 55 million on account of lower cash flows from operating activities and higher investments.

“The economic situation is still challenging, since global economic and political uncertainties remain”, said CEO Dr. Markus Steilemann. “Nonetheless, we reached our earnings targets and were able to increase our core volumes again in the second quarter. This underscores the trend towards more sustainable solutions, which we offer to many industries.”

The results for the first six months were well under the previous year's level, but this was because 2018 was marked by exceptionally high margins in some product groups.

“Our half-year results met our expectations in the current economic environment. Thus, we confirm our guidance for the fiscal year. At the same time we will closely follow further developments in our major sales markets,” explained CFO Dr. Thomas Toepfer. “The automotive industry developed much weaker than expected, on the other hand the construction sector as well as the wood and furniture industry evolved better.”

For fiscal 2019, Covestro continues to project core volume growth to be in the low- to mid-single-digit percentage range. FOCF is expected to be between EUR 300 million and EUR 700 million, with ROCE between 8% and 13%. EBITDA for the fiscal year is forecasted to be between EUR 1.5 billion and EUR 2.0 billion, while in the third quarter, the EBITDA is expected to be around EUR 410 million.

Progress on portfolio optimization and investments

In the second quarter, Covestro made further progress on improving the portfolio. The European systems houses business is being sold to H.I.G. Capital for a price in the high double-digit millions of euros.

Simultaneously, the Group continues to focus on value-creating investments: In May, Covestro laid the foundation for expanding production of polycarbonate films in Dormagen, Germany. This investment is part of a program totaling EUR 100 million with which Covestro aims to reinforce the high-margin specialty films business. Provided the necessary official permits are obtained, construction of a dedicated chlorine supply facility for the existing MDI production in Tarragona, Spain, will begin at the end of the year. The first internal milestone was met in Baytown, Texas (USA), where a large-scale plant for the rigid foam precursor MDI is planned. Now, the 100-person project team will begin with the detailed technical planning

In the Polyurethanes segment, core volumes grew by 0.7%. Sales declined 24.3% to EUR 1,489 million, driven by lower selling prices as a result of increased competition. The downturn in selling prices was also evident in EBITDA, which decreased to EUR 172 million (–70.5%).

Core volumes in Polycarbonates rose by 4.4% over the prior-year quarter. Whereas the electrical and electronics industry and the construction sector contributed to this growth, volumes in the automotive industry declined. Sales were down 15.0% to EUR 898 million in the second quarter of 2019. EBITDA in the Polycarbonates segment was 46.0% lower, amounting to EUR 154 million, mostly due to the drop in selling prices.

The Coatings, Adhesives, Specialties segment saw a decline in core volumes of 4.7%. As a result, sales were down 1.3% to EUR 621 million. Exchange rate movements and the gradual purchase of the shares of Japan-based DIC Covestro Polymer Ltd. had a positive effect, however. The increase in the stake held in the Japanese joint venture also led to a positive non-recurring effect on EBITDA, which grew 7.9% to EUR 150 million in the second quarter of 2019.

Intensified competition a hallmark of H1 2019

On the whole, the first six months of 2019 saw growing competition, as expected. Volumes sold remained mostly stable (–0.4%), while Group sales dropped 16.4% to EUR 6,386 million due to lower selling prices. In the Polyurethanes and Polycarbonates segments in particular, selling prices were well below those of the prior-year period. As a result, EBITDA was down 56.0% to EUR 901 million. Net income stood at EUR 368 million (–70.5%). Free operating cash flow decreased to minus EUR 100 million.

With 2018 sales of EUR 14.6 billion, Covestro is among the world’s largest polymer companies. Business activities focus on the manufacture of high-tech polymer materials and the development of innovative solutions for products used in many areas of daily life. The main segments served are the automotive, construction, wood processing and furniture, and electrical and electronics industries. Other sectors include sports and leisure, cosmetics, health, and the chemical industry itself. Covestro has 30 production sites around the globe and employed approximately 16,800 people (full-time equivalents) as of the end of 2018.

Note to editors:
Below is a table showing key data for Covestro Group for the second quarter of 2019 and the first half of 2019.

The Half-Year Financial Report is now also available as an online version: https://report.covestro.com/interim-report-q2-2019/ 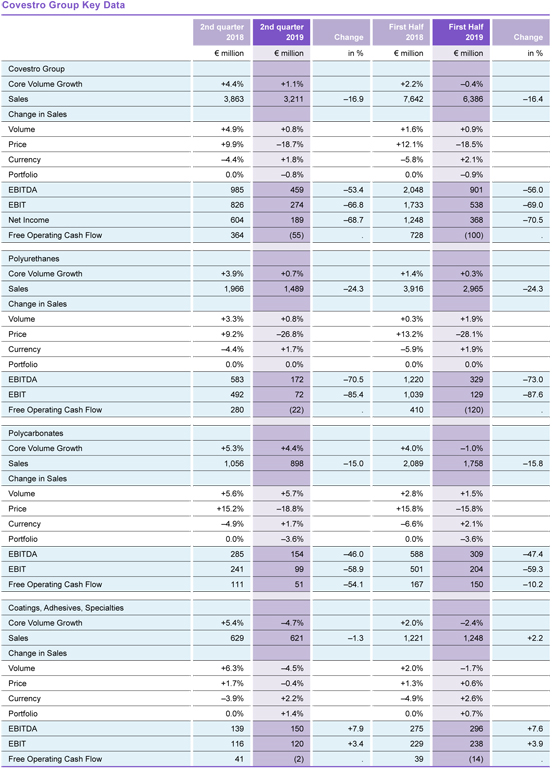